Festival 4+4 Days in Motion to start in Desfours Palace, this year’s slogan is Nobody Has Anything

The 24th international festival of contemporary art 4+4 Days in Motion will take place in Prague on October 4-12. More than 60 contemporary artists will bring the Neo-Renaissance Desfours Palace at Florenc to life as part of the main exhibition project Places of Act with the subtitle Nobody Has Anything. Curator Milan Mikuláštík arranged the exhibition Noteverything, with the opening taking place on Friday, October 4 at 6 p.m. Apart from exhibition interventions, the festival will also offer an extensive international programme with nine performances., the provocative performer Jeremy Wade and The Clearing will seize the Archa Theatre on Saturday, October 5. The Finnish and Egyptian artist Samira Elagoz will stage her successful performance Cock, Cock… Who’s There? One day later. Niv Sheinfeld and Oren Laor, ranking among the most outstanding performers of contemporary Israeli dance, will bring their most intimate production The Third Dance to the Ponec Theatre, in which they reflect 15 years of their life and work together. The Centre for Contemporary Art DOX will see the non-binary artist Sorour Darabi and his “ode to vulnerability Savušun. Last but not least, the festival will also offer five Czech theatre premieres by Wariot Ideal, Spitfire Company, Lucie Ferenzová, Tereza Hradilková and Viktor Černický, lectures, programme for children and seniors, and many other features in the supporting programme.

The festival will open on October 4 at 6 p.m. with the exhibition Noteverything, arranged by curator Milan Mikuláštík for the main exhibition project Places of Acts in the Desfours Palace at Florence. “The exhibition title is the reference to festival’s ambiguous slogan – Nobody Has Anything. We tried to create a platform for meeting authors of various generations, stages, countries and history. Art is perceived as a space of plurality, respect, reciprocity and cooperation,” Milan Mikuláštík explains. He will also be a guide at the exhibition on October 5 at 5 p.m. and October 12 at 3 p.m.

Noteverything emphasizes activities of art groups and pairs, such as intermedia collectives Black Hole Generation, Dune, or the pair Mitríková–Demjanovič and Altman–Krykun. Yet several outstanding artistic solitaires rank among the participants as well: Luboš Plný, Mexican sculptor Jimena Mendoza, or the universal Dutch artist Roel van der Linden. This year’s specific feature is a significant involvement of Slovak artists, such as Emília Rigová, Aneta Mona Chisa, Marek Kvetán, Radovan Čerevka and Martin Kochan. The international guests include the Thai artist based in Sweden Nongkran Panmongkol and the duo from Budapest Lörinc–Borsos. The Norwegian-German author Bjørn Melhus will participate in the exhibition, as well as the showcase of his movies on October 8 at 7.30 p.m. “The subtitle of the exhibition ‘Nobody Has Anything’ is an answer to social, environmental and economic changes we are experiencing and to which we shall react,” says Denisa Václavová, the organizer of the festival.

The historical building will be also revived by the exhibition intervention of Pavla Melková and Michal Škoda called We Only Have What Is in Our Head, in which the authors contemplate about perceiving the world through its image in our mind. The installation Interventions into Art created by LSJ will provide the visitors with the opportunity to enjoy art through the eyes of a critical visitor, author and participant of a conceptual project. Visitors are shooters, the gallery is a shooting range, art is the target.

This year’s international theatre programme of the festival 4+4 Days in Motion focuses on works by non-European performing artists. The theatre part of the festival will start in the Archa Theatre on Saturday, October 5 at 8 p.m. with the performance The Clearing. The American performer, curator and teacher based in Berlin Jeremy Wade, the winner of the prestigious New York Bessie Award, expresses deep concern about the future in his new solo performance. He employs his typical expression – the combination of dance, physical action, singing and text appeal – for “hallucinogenic dismantling of reality”.

The performances will take place – apart from the Archa Theatre – in Ponec and the Centre for Contemporary Art DOX. “We have chosen several original top performers and dancers, who keep destroying deep-rooted stereotypes with their radical and critical production. Most of them will present their work to Czech audiences for the first time,” says Pavel Štorek, festival’s programmer.

Performers Samira Elagoz and Sorour Darabi will experience their Czech premiere. The Finnish and Egyptian artist Samira Elagoz will bring the successful performance Cock, Cock… Who’s There?, to the Archa Theatre on October 6 at 8 p.m., in which she combines performative methods and video, making up the unique style of “docu-fiction”. ”. The non-binary artist Sorour Darabi will stage his “ode to vulnerability” Savušun, based on the eponymous Shiite festival in the Centre for Contemporary Art DOX on 12 October at 6 p.m. Darabi oscillates between a real and symbolic loss, comfort and discomfort, toxic masculinity and vulnerability of one’s own identity.

Visitors to the 4+4 Days in Motion will also see the French musician and performer Gérald Kurdian, who will present his stand-up performance Hot Bodies full of metamorphoses of sexual revolutions of the 20th and 21st centuries. Niv Sheinfeld and Oren Laor, ranking among the most outstanding performers of contemporary Israeli dance, will bring their most intimate production The Third Dance, in which they reflect 15 years of their life and work together. The Belgian artists Louis Vanhaverbeke will examine the limits of normality in the performance Mikado Remix. The documentary performance Mining Stories uses testimonies about the tragedy in the Brazilian mining region Minas Gerais, analyzed by Silke Huysmans and Hannes Dereere, focusing on memory, politics, and religion. The American dancer and choreographer Trajal Harrell will present his feature production for three dancers Judson Church is Ringing in Harlem, in which he merges two distant worlds – postmodern dance’s minimalism and Vogue’s lavishness. In her distinctive stand-up Black Off, the South African actress and performer Ntando Cele sharply criticizes prejudices and disregard and offers the audiences with new ways to think about racism.

The centre of the festival – Desfours Palace – will see several Czech theatre premieres: in their performative installation Landing, Lukáš Bouzek, Tereza Hradilková and Apolena Vanišová will pay homage to the American writer Truman Capote. The Wariot Ideal company returns to the Desfours Palace after one year and will stage the performance Pests. Another premiere in the Desfours Palace will be the family production Underdogs. The Spitfire Company project is an umbrella for the performance of the duo Petr Boháč and Martin Tvrdý, presenting a comics story about an unusual friendship between a boy from Hongkong and a dog, and their fight against the secret police in China. In his new project Prime Figures, Viktor Černický provides the possibility to participate in the performance for everybody who are represented in theatre rather scarcely. Director Lucie Ferenzová,  Anežka Hessová and Eva Stará tell the story about tough reality of social integration in the performance My Hood, inspired by Zsuzsa Bánk’s Bright Days. Zuzana Sceranková and Natálie Rajnišová and their performance A Desert Island Protects 15,000 Inhabitants balance on the verge of a performance, show and exhibition.

Viktora Čech’s performative lecture The Helpless Critic will present the awards ceremony of the sixth edition of the Věra Jirousová Award on October 9 at 6 p.m. The aim of this award for emerging and established art critics is to highlight this important discipline, which is not discussed enough) and to support emerging critics.

The festival also features a supporting programme. Music journalists Karel Veselý and Miloš Hroch will hold a lecture on October 10 at 6 p.m. All Cats Are Grey will focus on the topic of sadness and depression in contemporary pop music. The open forum Water and the Future will ask questions about the way media warn us against the lack of water on October 8 from 5 to 7.30 p.m. The title Good Practice represents the full-day know-how exchange among selected city and regional galleries from the Czech Republic, focusing on exhibiting contemporary art. Art professionals will have a chance to participate in the four-day Festival School of Arts Management.

The teenagers can see the premiere of Memory on October 5 at 6 p.m. Pupils and students of basic and high schools will have a chance to participate in the supporting programme of the platform Do You Have a Knack for Art? The visual design will be done by the visual artist Kakalík, who, bearing in mind the subtitle Nobody Has Anything, will pay attention to the tiniest details, the ability to do only with little, artistic minimalism and “emptiness”.

The festival was supported by:
Ministry of Culture of the Czech Republic, Municipality of Prague, IN SITU, Creative Europe, Flanders State of the Art, French Institute in Prague 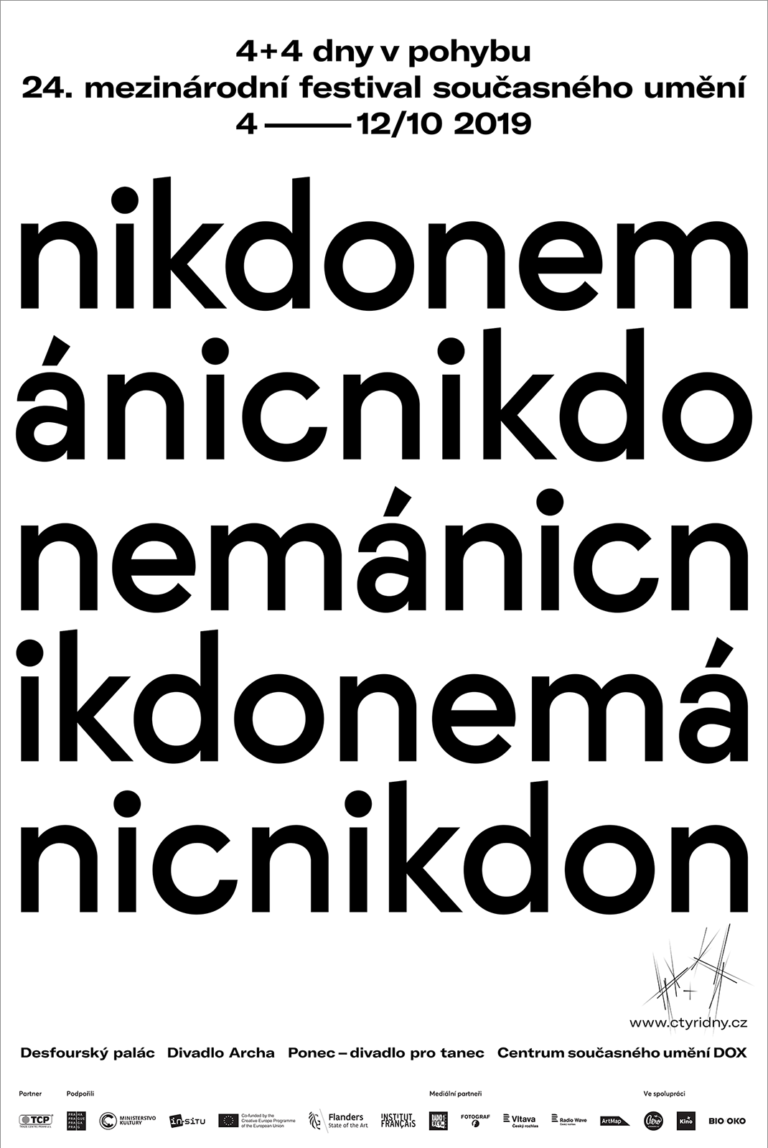 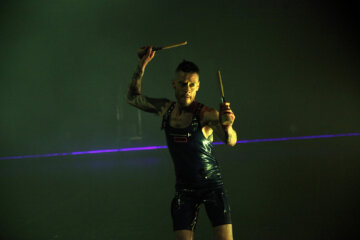 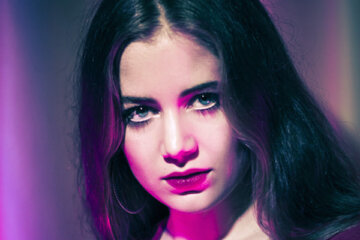 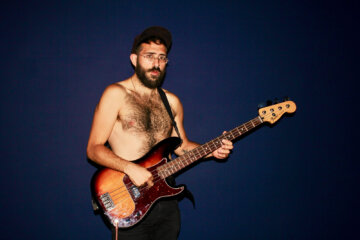 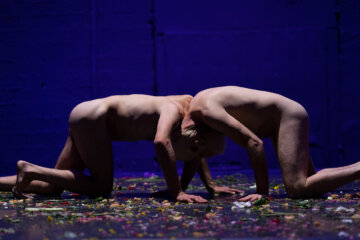 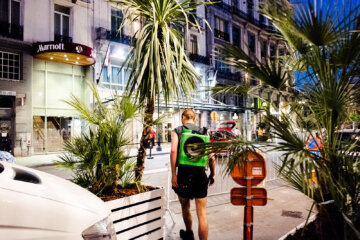 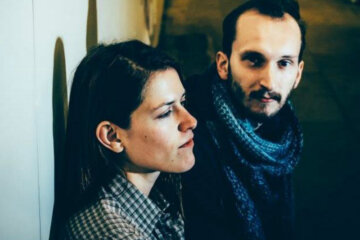 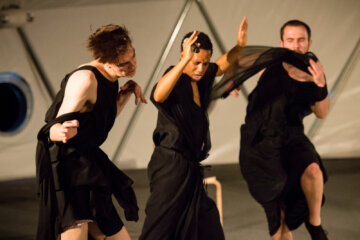 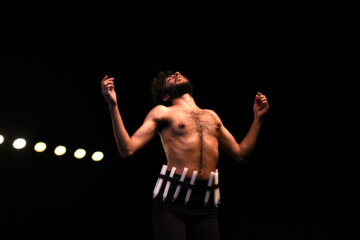 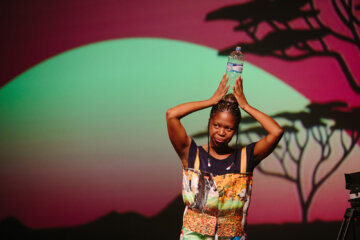