A performative object installation combined with primitive movement into a simple two-room composition.

Now a traveler must make his way to Noon City by the best means he can.

An intimate testimony of a slowly aging man presents an introverted journey through the long-hidden landscape of his lonely childhood, where time got stuck under uncertain circumstances many years ago. The hero’s path is lined with a number of cranky female characters inhabiting a bizarre micro-world that exists on the border of quite an improbable reality and a very convincing fantasy. The short provocative encounters gradually reveal the thin layers of the boy’s teenage self.

The performance’s creator work loosely with literary themes from the work of the American author Truman Capote.

Do not take it seriously, what you see here: it’s only a joke played on myself by myself… it amuses and horrifies… a rather gaudy grave, you might say.

Lukáš Bouzek – born and raised in Prague’s Dejvice neighborhood and a graduate of DAMU, where he studied acting at the Department of Alternative and Puppet Theater, Bouzek has been performing with Kladno’s Lampion Theatre since 2016. He also does puppet theater for children and adults with the Puppets without Borders group and leads workshops in the Czech Republic and abroad (Mexico, Germany, Bulgaria). Along with several classmates from DAMU, he founded the Lachende Bestien ensemble, where he appears as an actor. He also has teaching experience from leading theater workshops for children at adults, for instance at the Alfred Junior children’s theater studio or the Creative Camp held as part of the KoresponDance festival. His extensive experience as an actor and performer includes work for various independent theater projects, including the D.I.S.Harmonie improv group, the Na hladině community theater project, and the Teatrotoč street theater festival. Bouzek is a passionate amateur hockey player and also plays drums for the band VOBEZDUD. He and his wife, the actress Dora Bouzková, have five children.

Tereza Hradilková began dancing as a child with the Valášek folk dance ensemble, and later studied at the Duncan Centre dance conservatory and The Theaterschool Amsterdam. She spent two months gaining professional experience in New York, after which she began dancing for various choreographers in the Czech Republic and abroad. Her debut work, the duet Variable with Einat Ganz, immediately qualified for Aerowaves Spring Forward. For her further experiments, she co-founded the Truhlárna space, which is where she created her two most recent solos: Swish, which was recognized by the international jury of the Czech Dance Platform and has been invited to various foreign festivals (Rencontres chorégraphiques internationales de Seine-Saint-Denis, Julidans NEXT, Tanzmesse 2018), and Don’t Stop, which won the special jury award at the Czech Dance Platform and was chosen for the Les Plateux festival in Paris, Tanec Praha in Prague, and the 2019 Norma Festival in Ostrava. She often work in close collaboration with musicians (among others, Filip Míšek from the Czech band Khoiba and Tomáš Dvořák alias Floex), whose music and presence on the stage are central elements in her work.

Apolena Vanišová studied directing at DAMU’s Department of Alternative and Puppet Theater, where she focused on interdisciplinary projects and theater productions in originally non-theater spaces. She is currently studying the subject of performance installations as part of her Ph.D. studies. In her works, she seeks a sense of drama not through situations, but by ordering and layering scenic images and performative actions. She is a long-time collaborator of Petr Krušelnický and regularly directs performances at Prague’s MeetFactory. Her most distinctive works include the performance installation Cablestory at the Jáchymov chairlift; Valentine, which won a Czech Theater DNA award, the installation Closed for a Private Party at Trafačka, and several projects for MeetFactory: Woman in a Taxi Crossing New York, The Burial of the Sardine, and Aluminium Queen. She is currently involved in exploring the possibilities of electro-mechanical object performances in projects such as Kračun, which received a Theater Critics’ Award and was named Project of the Year at the …příští vlna/next wave… festival. 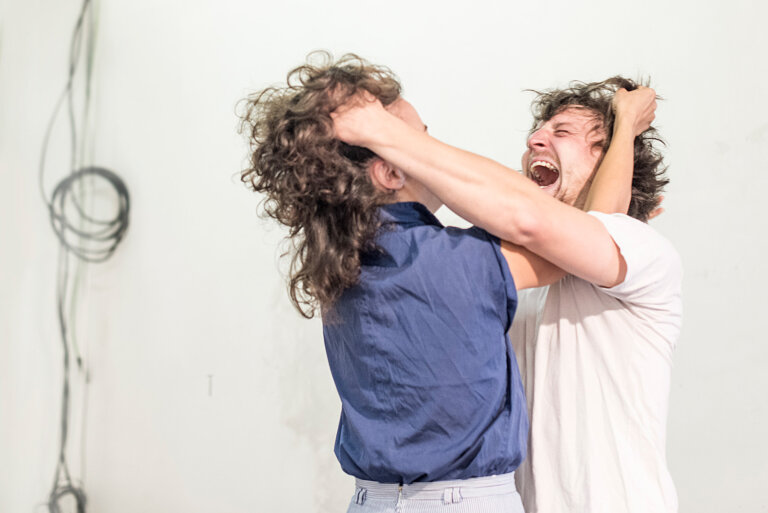