Prague, August 19 – 4+4 Days in Motion: International Festival of Contemporary Art, is coming to Prague again. From the 10th to the 18th of October, Prague will be flooded by “cultural adrenalin”: a number of modern, thought-provoking, interesting and stimulating events in various artistic genres, from dance and theater, exhibitions and audiovisual projects, to debates and guided tours. The many events include a large exhibition of contemporary art, located in the currently unused Palace U Stýblů on Wenceslas Square; performances by dance and theater troupes from Austria, Belgium, Israel, Norway, and the US in the Archa Theater; art projects from Belgium and the Netherlands, taking place outside traditional theaters; premieres of new performances by local troupes; or the Czech Crash international symposium, introducing a number of performing arts organizers. Apart from the abovementioned locations, the festival will take place in the Alta Studio, Ponec Theater, the former Center for Folk Handicraft at Národní třída, and several other unconventional locations.

As a part of the Places of Act project, the festival returns to the empty Palace U Stýblů on Wenceslas Square. “We want to utilize the potential of this amazing place and revive it by contemporary art,” says program coordinator Denisa Václavová. Palace U Stýblů is a seven-story functionalist building designed by architects Ludvík Kysela and Jan Jarolím. Formerly it used to house a famous and popular café, various stores, apartments, doctors’ offices, administrative spaces, a restaurant, and the legendary Alfa movie theater. The VOSTO5 Theater has a created a site-specific project especially for this unique building and its surroundings. “Palace U Stýblů will host an exhibition of contemporary Czech art, presenting the works of 40 artists. It will also offer lectures, guided walks around the area, concerts, and theater premieres,” adds Denisa Václavová. By “repopulating” the building, the festival is following its long-term tradition of reviving empty, abandoned, or yet to be occupied buildings in Prague. In the past, these included such premises as the former dentistry clinic in Jungmannova Street, the former Center for Folk Handicraft on Národní třída, the former International Student Union and Casino in Pařížská Street, factory halls in Karlín, the Holešovice Brewery, the Šlechta Restaurant in the Stromovka park, and many others.

This year, the festival will also include the 2014 Czech Crash international symposium. “We have taken advantage of more than 20 years of experience, during which we presented to the Czech public more than 200 artistic companies from 40 countries, supported 50 Czech original productions, and organized a number of art projects joining artists from all over Europe,” explains Pavel Štorek. On October 16-17, Prague will therefore welcome 30 foreign program advisers and curators of various dance, theater and multi-genre festivals and institutions, who have significantly contributed to the program content of the 4+4 Days in Motion festival, but have also had major creative and dramaturgic influence on performing arts all over the world. 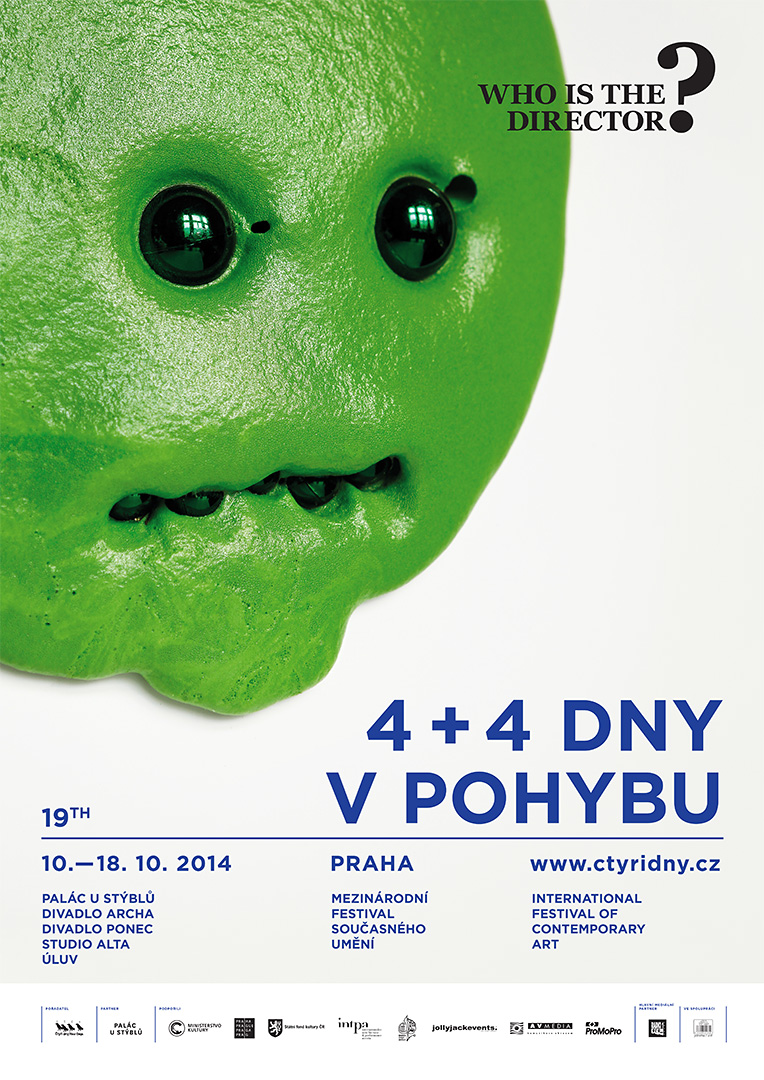