In the early 1960s, two separate dance traditions or dance styles started evolving in New York. In the desecrated Judson Church in Greenwich Village, a group of artists surrounding composer Robert Dunn was exploring the principles of everyday life: they analyzed walking, sitting on a chair, the motions while sweeping with a broom, etc. It was their reaction to the spectacularity, narrativity and expressiveness of modern dance and a way to search for a more contemporary expression. Their experimental work became known as dance post-modernism.

At the other end of Manhattan in the clubs and dance halls of Harlem, a new dance inspired by the walk of fashion models and poses in fashion photographs started appearing. Eventually, it became known as voguing and its stars were African Americans and Latin Americans from the queer and LGBT community. Trajal Harrell’s project was inspired by the question what would happened if these two distant dance world merged.

Using the juxtaposition of two different styles and the formal framing of an African-American mass, Harell creates a surprisingly contemporary experience in the continuum and the spirit of early American dance. It’s a comeback of high drama and high emotions. This feature-length performance of three dancers fuses the formalism and minimalism of postmodern dance and the extravaganza and the performative qualities of vouging.

Trajal Harrell is an American dancer and choreographer. He graduated from Trisha Brown Dance School, Martha Graham School of Contemporary Dance, Yale University and other institutions. He drew the attention of the critics with his Twenty Looks or Paris Is Burning at the Judson Church choreography created as a part of the Danspace Project on the 50th anniversary of the creation of the Judson Church Dance Theater. Since 2013, he’s been researching the relation between modern dance and Japanese butoh. The results of this work are reflected in his choreography entitled Dancer of the Year, Dancer of the Year Shop (2019). 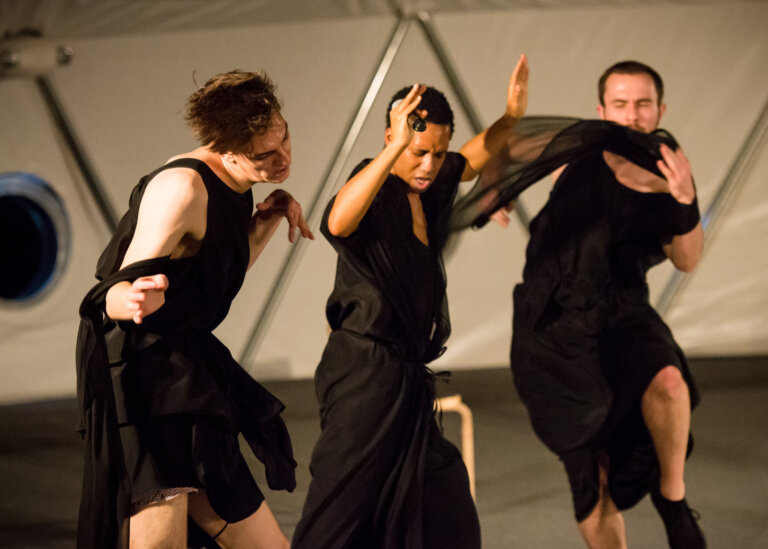