Every year, the 4+4 Days in Motion festival also includes exhibitions of visual art. This year, the labyrinth of rooms in the neo-Renaissance Desfours Palace at Florenc will be filled with paintings, sculptures, installations, photographs, and videos by more than fifty contemporary artists from the Czech Republic and abroad. The title of the exhibition, “Noteverything,” is a response to the festival’s ambiguous slogan this year: “Nobody Has Anything.” As the exhibition title hints, it lacks a single unifying theme. Instead, it is a kaleidoscope whose individual fragments reflect a diverse range of issues and contradictions from the world today, a world “at a crossroads” that is seemingly impossible to grasp in all its complexity.

The selection of artists for this year’s exhibition has been guided by an attempt at creating a platform for bringing together artists from various generations, “scenes,” countries, and life stories. We see art as a space of plurality, respect, mutuality, and cooperation, with an emphasis on art groups or artistic duos. These include the intermedia collectives Black Hole Generation and Duna and the artistic duos of Mitríková/Demjanovič and Altman/Krykun. Several distinctive artistic outsiders are participating as well, for instance the “academic model” Luboš Plný. Other outsiders are artists from distant countries who have decided to live and work in Prague, such as the Mexican sculptor Jimena Mendoza or the multifaceted Dutch painter Roel van der Linden, who is here presenting his sculptural work. Something different this year is the large number of Slovak artists, including engaged Romani artist and winner of last year’s Oskár Čepan Award Emília Rigová, Aneta Mona Chisa, Marek Kvetán, Radovan Čerevka, and Martin Kochan. Foreign guests include the Norwegian-German artist Bjørn Melhus, who directs and produces films in which he usually performance all the roles himself, the Thai-born Swedish artist Nongkran Panmongkol, and the Budapest duo Lőrinc Borsos.

Many of the works were made in response to the specific exhibition space inside a historically valuable but dilapidated tenement building whose various layers of architectural alterations and design are intertwined in an almost organic manner. Similarly, during the exhibition various artistic positions and strategies chaotically overlap and contrast with one another. Rather than providing answers, we encounter a layer of questions – aesthetic, formal, political, socially critical, environmental, spiritual, and philosophical.

In the 1970s, a new influential theory emerged in US sociology, mainly focusing on the analysis of globalization and its impact on international relations and global capitalist economy. The basis of the “world-systems theory” is a condensed perspective of geopolitical relations, differentiation of territories into core and periphery countries and exploitation of poor peripheries by the rich centre and collaborating semi-peripheries.

This inequality, in addition to long-term economic oscillations, generates a wave of instability, cyclic erosion of social relationships and ecological crises. According to this theory, the not-so-far future will see the collapse of the capitalist world system itself, which will in turn transform into a new system – “bi-forking” itself. This process might result both in the fall into the dark abyss of chaotic barbarism, but also in the rise of a new, more unbiased, even if not completely perfect and just system. In any case, this turning point is going to be an occasion to reconsider in more depth all peripheries exploited in the long term. The founder and major author of the world-systems theory, the U.S. sociologist and economist Immanuel Wallerstein, died only two months ago aged 88, yet some of his ideas and predictions are sneaking in and becoming more and more up to date as time draws on.

Just now, we are witnessing live the decline of unilateral American hegemony and the rise of Asia’s once-and-future economic and power centres. The shakiness of the system is outright tangible. The society perceives rising waves of insecurity and danger as we are experiencing life in a society full of risks. The outsourcing of manipulation techniques successfully guarantees depoliticization of democratic mechanism for political leaders who lead the public astray to be aware of false and marginal causes. Such phenomena as solidarity and democracy are doomed to fail facing the logic of capitalist accumulation. The result is clear: social inequality, split societies, and more insecurity. More often than before, analogies of decadent periods of collapsing empires are resurfacing today.

The crisis of collapsing centres is intermediately present also in semi-periphery and periphery regions. In 1518, the Czech physician Mikuláš Klaudyán of the Central Bohemian town of Mladá Boleslav published the first printed map of Bohemia. Apart from land symbols and noble coat-of-arms, the Renaissance map sheet was decorated with a figural motif depicting a coach drawn from opposite sides by two horse teams, each in a different direction: a metaphor of a society split in religious and political terms. The modern parallel of this picturesque scene is still ironically appropriate nowadays.

The ideology of indefinite economic growth has also been colliding with the barriers of spatially and energetically limited ecosystem. Ecological issues have been gaining very specific, nearly apocalyptical features. Topics that have been for years assigned exclusively to eccentric leftist radical activists, are being co-opted by mainstream society which, through its hysterical approach, empties their contents. It is extremely difficult to conceive solutions to ecological problems in the environment of ongoing fights between superpowers for economic and technological dominance. Meanwhile, millions of inhabitants of global peripheries are waiting in the queue, expecting higher standards of living. However, those will be in still decreasing abundance over time. “Hunger in the world exists not because we can’t feed the poor, but because we can’t feed the rich,” as Mother Teresa once said. In the meantime, the inhuman machine of the capitalist world-system is running like there is no tomorrow.

The exhibition “Nevšechno” (“Noteverything”) is an attempt to reflect the latent social instability and its impact on the form of contemporary arts “from the perspective of the Central European semi-periphery”. A response to this complicated situation is a kaleidoscope of topics, attitudes, forms and artistic strategies that pile up in layers within the exhibition, intermingling in a very similar way as the layers of wonderful historic frescoes and Neo-Baroque and Art Nouveau elements blending within the Neo-Renaissance interiors of Prague’s Des Fours Palace with additions of (often comically amateurish) architectonic and design interventions from the late 20th century, but also with traces of previous two editions of the “4 Days” festival.

The key approach to the selection of artists taking part in the “Nevšechno” exhibition was an attempt to create a platform for confrontations of artists of various generations, different “sceneries”, countries and fates. The art, as perceived here, stands for a space full of freedom, respect, mutuality and cooperation. The focus is on the work of artistic groups and duos with presentations of, among others, the Black Hole Generation and Duna collectives or the Mitríková-Demjanovič or Altman-Krykun artistic pairs. There are also a few outstanding single artists on display, be it e.g. “The Academic Model” Luboš Plný. Another kind of single artists are solitary male and female representatives from faraway countries who decided to settle and work in Prague, e.g. the Mexican sculptor Jimena Mendoza or the multi-genre Dutch painter Roel van der Linden who makes an exception out of his work here, presenting himself as a sculptor. This year’s specific treat is a strong presence of Slovak artists, e.g. the socially committed Romany artist and last year’s Oskár Čepan Award laureate Emília Rigová, Aneta Mona Chisa, András Cséfalvay, Michal Machciník, Marek Kvetán, Radovan Čerevka or Martin Kochan, among others. Other foreign guests worth a mention are the Thai artist Nongkran Panmongkol living in Sweden or the Budapest duo Lörinc Borsos. The Berlin-based artist Bjørn Melhus directs and produces fiction films with all parts usually acted by himself. As one of the accompanying events following the exhibition, a screening of both his older and more recent films will take place, presenting in detail the work of this remarkable artist to Prague audiences. 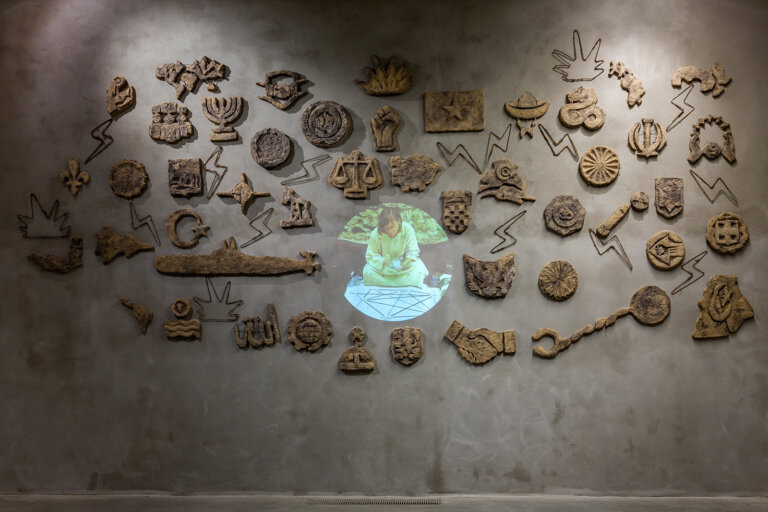