Are we able to be a part of today’s women’s revolt, even though we are lounging around in an armchair in our living room? Can we – dressed in our comfy pajamas – radically stand behind our opinions? How are we at almost fifty different than we were twenty years ago?  “Where” and “what” is now our “female strength”? Are we capable of change?

The perspectives of five different women on the topic of strength on an improvised stage living room…
My speech on gay pride, her speech made during an environmental conference, and another speech addressed to me on social media with a request to be shared.

Speeches – games with words, a race to see which gets more “shares”. Their impact? It depends on whom.

Secondhand Women is an international democratic theatre group established in 2003 by five independent women – performers – now aged between forty and fifty: Petra Moře Lustigová, Daniela Voráčková, Halka Třešňáková, Stefania Thors, and Helene Kvint. All of them rely on humor and the need to get to the root of things. They survive poverty as well as luxury, broken nails, and even high voltage accidents. They come from three countries: the Czech Republic, Iceland, and Denmark.

They respect each other’s different creative experiences, skills, and opinions. In their eyes these are not characteristics of competition but rather an advantage. Their collective creativity brings both surprising and suspenseful moments not only for the spectator but also for them. They view the risk associated with this way of working as a challenge.

Up until the final phase, when they must all be on stage at once, they work without a director. There is no man in their group, although their relationship towards men is more than warm! This “women’s” atmosphere thus excludes any conflicts regarding a man or a director – something that, in the theatre environment, is often toxic for art.

They openly deal with gender topics that are usually not talked about. They work with the aspects that are “taboo” as regards women’s lives. Their inspiration comes primarily from their own life experiences but also from the stories of other women. They speak about their personal, even intimate, feelings, making minor things serious and injecting humor into the serious ones. 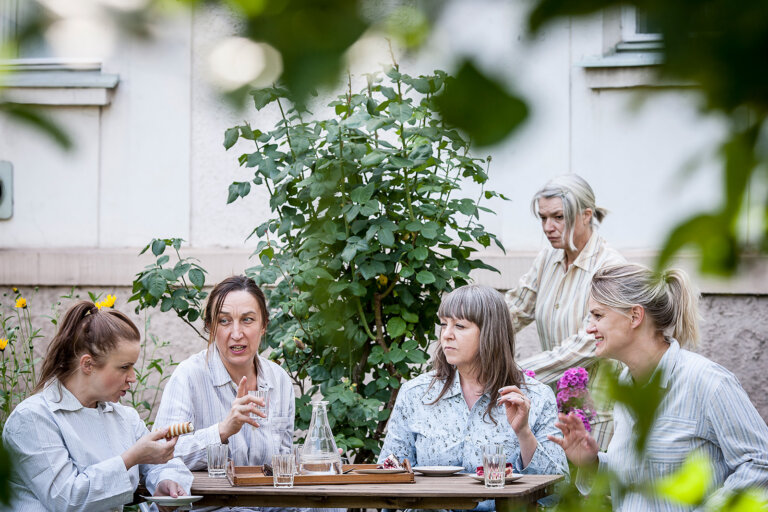