All-encompassing topics are often just an excuse for bringing together a large volume of artworks. However, if we remove the “uncertainty principle” from its home field of quantum physics, the basic premise found within it can, albeit in a somewhat overblown manner, be interpreted as follows: the more we know, and the more detailed the information we have, then the harder it is to comprehend the whole, to predict future development, and to understand the current situation. In this form the uncertainty principle seems to be a good metaphor, or even description, of the world around us as well as our situation within it. We know everything but understand nothing. The end result is chaos, confusion, and exhaustion from the constant search for coherence.

This is all fertile ground for stories. Where one exists, we try to dismantle it – where there is none, we try to invent one. In either case, we give our lives a purpose. It seems that stories are a constant that shape our perception of the world and art. Today’s situation is starting to resemble an addiction: conspiracy theories, thrillers, revealing confessions – the series on channels such as Netflix or HBO are seething with all of these. When two artists meet, they most certainly will chat about which series has just contracted them. That makes it even stranger that only a very few of them try to openly work with a story, or to use the specific language of contermporary art while drawing the viewer into the plot without hiding behind a press release or forcing us to look for complete information on Wikipedia.

The artists presented at the STORIES ARE US exhibition are a relatively random sample of those who are not afraid of a story. Some of them have even been working with stories for a long time. This is the case of Tomáš Svoboda, who likes to use the re-narration of a story through distilling its elements into a description, text, or even parts of a stage set. It is then up to us to fill in the remaining “details”, which may be an image, the rigmarole of the plot, or emotional aspects. In this way Svoboda explores the components that make up stories, and what is necessary to communicate them and to understand them. He tries to make it simpler for us by referring to iconic films, or critical situations in modern history. In comparison, the young Dutchman Joris Verleg has put together a single story from many individual attempts at narratives made by people from the entire  world of internet. These individuals unknowingly shape their purely personal compulsion to put their lives into vlog format into an identical narrative structure, ultimately melding into one multi-voice chorus.

A high degree of intimacy is found in Rosanne Jonkhout’s video, in which she has processed hours of recordings from VHS tapes into a fifteen-minute narrative about mutual manipulation during vacation. The camera was used by individuals for communication and the question is to what degree it reflects or manipulates the reality of their relationship. The longer we look into the lives of these strangers, the less clear it is who is the victim and who is the bad guy.

In comparison, Joep Hinssen’s installation seems to be quite straightforward. In it, we watch the precisely captured performance of a chorus, conductor, and drummer. However, the composition is utterly ungraspable – it has no structure, it flows from quiet passages to a climax, only to become muted once again. It is only when we see an inconspicuous screen showing a recorded football match that we find the key: Hinssen “translated” the legendary humiliation suffered by Spain a few years ago at the hands of the Oranje team (3:0) into the contemporary music genre. Maybe it was unintentional, but in this way he successfully captured the incompatibility between a sports performance and an artistic work.

In his graduation video Kaweh Modiri, now an experienced director, tells the story of his search for the thief who stole his laptop. With youthful vigor, he combines narrative styles in such a way that ultimately we do not know what really happened (if it truly happened at all), what the facts are, who the actors are, and how it was possible to interweave everything in a way that it all came together in something of a crime story from student life.

Adéla Babánová as a true professional works with a complete film team to create short films, which, based on their form, definitely fall into the category of fiction films (actors, costumes, and set design), but their starting point is associated with real historical situations. They thus have a documentary component, but the situation being played out contains so many misleading elements that we begin to doubt the truth of the documentary aspect and even of our own knowledge, and so we continue to expect more information that will clarify things for us. However, docudrama is definitely not Babánová’s objective.

STORIES ARE US tries to show several ways in which a story and the way it is narrated can be transformed into a theme which the artist explores in his or her work. This type of exploration is different from standard film and series production. At the same time, the presented artists are not afraid to tell a story that, in some way, reflects their personal fascination.

As a part of the exhibition UNCERTAINTY PRINCIPLE › 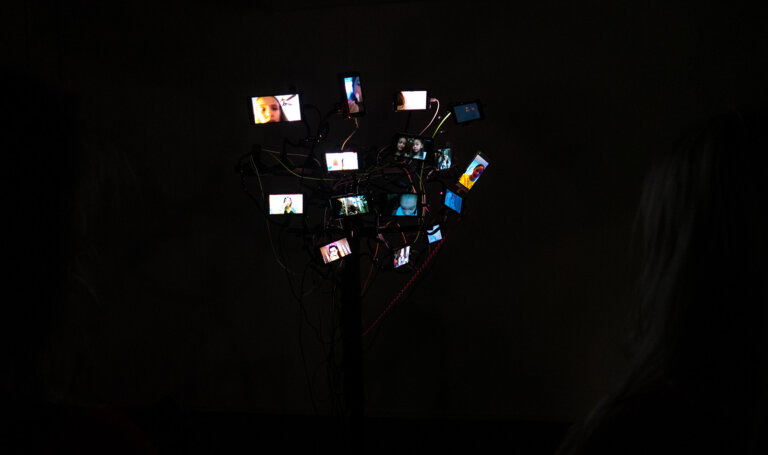