A cocktail of music, entertainment, and technology
free entry (courtyard)

ORCHESTRoj is a strange thing, a strange and rusty object on wheels. It is neither car nor wagon nor tanker – it is simply a STRANGE RUSTY THING.  This music-theater project grew out of all the experiences and advice that the Zatrestband orchestra gathered over the years. ORCHESTRoj is a large rusty thing five big guys wind up like a toy car, using tools, wrenches, and most importantly KEYS to cause this big rusty “thing” to open up and grow. It grows to such dimensions that we see what was hidden inside: a large swing orchestra. And this is the moment when the strangeness ends and the fun beings. Music. And joy.

ORCHESTRoj is the result of the combined skills of metal artist Petr Píša and the Zatrestband swing orchestra, of which he is the bandleader. It is a strange, mobile, folding, growing stage, whose mobility, shape, and magic have taken on forms that few people have seen before. The orchestra that appears from the object after its technological overture consists of 21 musicians and singers. Although Zatrestband has been called a swing orchestra, it plays more than swing. ORCHESTRoj is controlled by five “key-turners” who turn the keys and make things happen, sometimes things that seem to flout the laws of physics. The performance also includes a “ferry” that brings Zatrestband’s moist valuable resource – its singers. Time to stomp and swing! 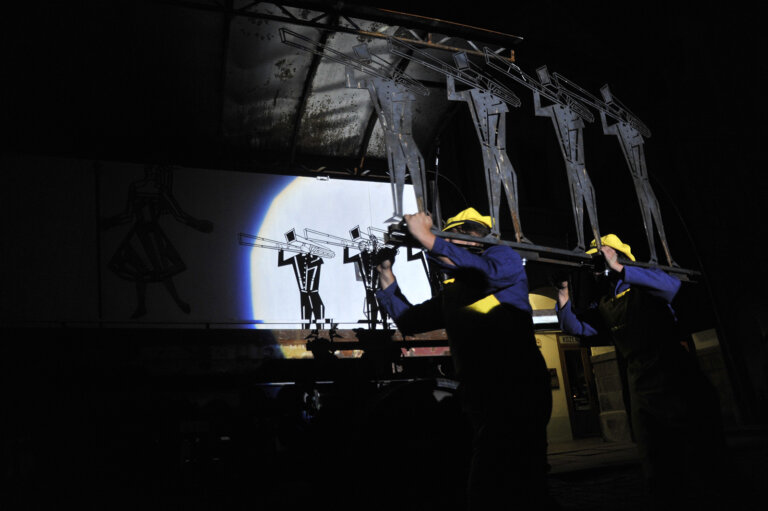