A BRIEF PRESENTATION OF IN SITU

IN SITU IN SHORT

IN SITU is the European platform for artistic creation in public space. It is led by Lieux publics, European and national centre for artistic creation in public space, France. Since 2003, it has supported more than 270 artists to develop their creations, adapt them and make them tour all over Europe, following the artists through all the steps: artistic laboratories, support for production and adaptation, residences,
coproductions…

In 2020, IN SITU has been granted by the European Commission to develop a new cooperation project, called (UN)COMMON SPACES, running from November 2020 until October 2024.

A strong history of cooperation

IN SITU relies on a well-established partnership backed by seventeen years of cooperation. Several successive projects have created a relationship of trust where partners share the same values and goals across south, north and central Europe. Convinced that the human connections are key to a good cooperation, the introduction of new partners has always been progressive.

The 19 partners of (UN) COMMON SPACES

While most of the partners were already in previous IN SITU projects, the network is welcoming new ones as well (see detailed presentation of partners).

The 13 associate partners of IN SITU

IN SITU initiates lighter forms of collaborations with other organisations outside of the main partners’ network.

A PROJECT FOR ARTISTIC CREATION IN PUBLIC SPACE

At a time when European societies are undergoing considerable changes, art must be at the forefront to offer new perspectives. To rebuild the pact between art and society, more and more artists are leaving conventional spaces to work in and with the public space, in direct contact with citizens and inhabitants. (UN)COMMUN SPACES aims at supporting the strong growth of this sector at a European scale to reinvent the relation between the cultural sector and citizens.

A CHANGE OF PARADIGM

The partners will gather around them a circle of artists and a circle of citizens. This new collaborative format, a result of the IN SITU partners’ expertise, reflects their conviction that sharing skills, artistic vision and plurality of perspectives is today the relevant way to ensure that artworks will resonate with a large and more diverse audience.

A CHANGE OF PERSPECTIVE

A CHANGE OF FRAMEWORK

Offer IN SITU artists a protean and flexible path where they will be supported for their artistic career as a whole rather than only for their next project:

Open the network to the other stakeholders of the public realm, creating spaces for exchange where artists, producers and citizens can imagine how art contributes to societal changes (and vice versa), transforming the relationship between the cultural world and the citizens, and paving the way for a new relationship
with the audience:

GET INVOLVED! GET THE CONTEXT / FEEL THE EXPERIENCE

Create customizable routes/mobilities for artistic projects depending on the type of participation and the type of adaptation to the local context:

IN SITU brings together a group of programmers who are passionate about new forms of art and public space. They have been working together since 2003 to develop joint European projects.

To date, IN SITU has supported over 180 European artists. It gathers 25 partners from 17 countries from as many practical and aesthetic backgrounds which all contribute something vital to the network. Whether members come from a sprawling metropolis or a rural area, whether they are seeking to rehabilitate industrial wasteland or redesign landscapes, the goal is always to serve artists working with, in and for public space.

IN SITU is now working across two complementary projects:

IN SITU PLATFORM is one of the first platform to have been selected by the European Commission under the Creative Europe programme, it aims to highlighting and promoting emerging artists who are working outside conventional venues and contributing to the transformation of our territories

IN SITU ACT, a large scale cooperation project gathering 20 partners mostly from Europe will be funded for 4 years after its official launch in November 2016 until the end of 2020. It ambitions to be the European tool for the structuration of artistic creation in public space.

IN SITU brings together a group of programmers who are passionate about new forms of art and public space. Since 2003 they are committed to supporting artists working with, in and for public space. The network is led by Lieux publics – National Centre for Artistic Creation in Public Space based in Marseille (Fr) – and is developing through a number of projects supported by the European Commission.

To date, IN SITU is:

From November 2016 onwards, IN SITU ambitions to integrate two different but complementary projects: « IN SITU ACT » and « IN SITU Platform ». They will run side by side and carry on from one another with the aim of structuring the sector of artistic creation in public space in Europe and of improving its visibility.

A new large scale cooperation project for IN SITU, the European Platform for Artistic Creation in Public Space

IN SITU ACT, a large scale cooperation project gathering 20 partners mostly from Europe will be funded for 4 years after its official launch in November 2016 until the end of 2020.

IN SITU ACT ambitions to be the European tool for the structuration of artistic creation in public space and to achieve four main objectives:

IN SITU ACT and IN SITU Platform: two projects, one goal.

Granted with a three year funding, the IN SITU Platform 2014 – 2017 aims to highlight and promote emerging artists working outside conventional venues and contributing to the transformation of our territories. Over the course of three years, IN SITU Platform is developing a communication and brand narrative (storytelling), which is designed as a story to be shared with the general public, mixing technological creativity and high visibility at large popular events.

Concretely speaking, IN SITU ACT is:

IN SITU ACT brings together 20 partners from 12 countries, a story in 10 languages:

Project Cros-sing Time by Stage Code at the festivals belonging to the international network IN SITU.

These structures members of the IN SITU network have joined the META 2011-2016 project as Partners : their involvement within the project targets the touring of the creations iniiated by he co-organizers. 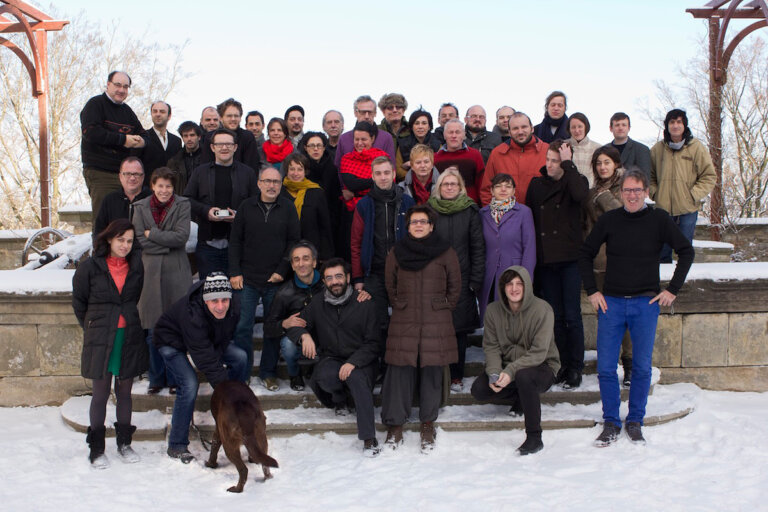