A gallery under the Vršovice sky / Places of Act Vršovice

Tereza Erbenová Alfa pozice / instalace
Every society has its hierarchy, and every person has his place in it. What are the main factors influencing our social position? What do we need or what should we not have in order to sit on the “highest chair”? Tereza Erbenová is a student of Dominik Lang’s and Edith Jeřábková’s sculpture studio at the Academy of Arts, Architecture and Design in Prague.

Zbyněk Baladrán Jednoduchá cvičení
Zbyněk Baladrán is an artist-archeologist. Today, he works primarily with video and archival photographs and video. His working methods are influenced by archaeology and avant-garde cinema. Based on his distinctive research, he creates a chaotic jumble of images, sounds, and texts that are often a reflection of the past past or the present past.

Jan Jakub Kotik’s New World Order (2004) on a blank Vršovice facade … This multi-layered, technical image refers to the now legendary advertisement for American Marlboro cigarettes. It is a critical revision, yet it does not suppress but instead develops the original magical visuality, offering numerous readings and additional interpretative layers.

The exhibition of works by Jan J. Kotík and Z. Baladrán is being held as part the second annual Fotograf Festival, entitled Mimo formát / Off Limits.
Curated by: Katarína Uhlířová.

ProLuka is an actual unused empty lot on the site of a demolished housing block
along the main avenue leading away from the city center (two streetcar stops from Náměstí Míru). The site meets all the requirements for the creation of an interesting and potentially successful exhibition space and for a place for social interaction. The site is visible and easily reached from the main street, accessible from the city center, rugged, a crossroads and a natural local center. It is a kind of gateway to the local residential neighborhood, a highly compelling, almost natural space that nonetheless is surrounded by typical historical buildings, which form a kind of architectural stage set.

ProLuka is an open-air gallery in public space, and also a place for cultural and
social interaction. Our challenge is to raise interest among the general public and to provide natural contact with contemporary art. Our aim is to present a diverse range of artistic approaches within a local context and to help residents experience this location in new and personal ways. 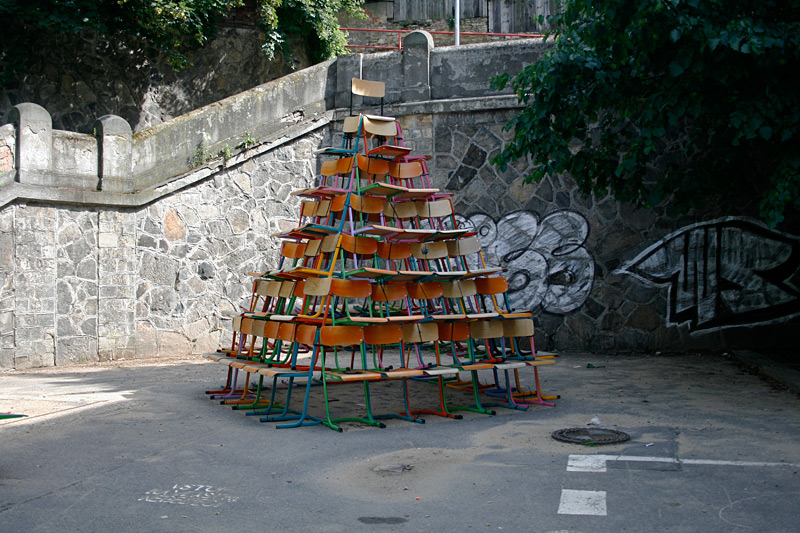