Four Days› Festival program 2012›Would you like to play another game?

an exhibition of contemporary art for the former Casino

“…A situation. The situation might look like this: At the end of the game, the machine asks you: ‘Would you like to play another game?’ Play again? Or play a different game? What kind of question is that? You have to decide. And all of a sudden, you don’t know what you want. That machine is the world all around you. Its current state has been pre-programmed. It is the world into which we were born, and nobody asked us if we are at all interested in being in this world. And we have no idea whether the world is interested in us. Perhaps – quite certainly, in fact – we have all programmed its appearance and continue to predetermine it. It isn’t important to find fault; now is the time to find other ways of playing, since the entire system is a game. Be that as it may, the question is as infantile as it is vital to our future: Do you want to play another game? Or: Do we want to play the same game differently? The structure into which we are injected is a large and complicated strategy, a game without any ‘Undo’ or CTRL Z – and most importantly, no chance of playing the same game again. It is one big gamble.”

A second man in a grey coat answers: “Sure, the worldwide structure of society is one big complicated game. But it is up to us to decide what parts and what passages of the game to play. Some of them we have to play no matter what, whether we want to or not. Art and artists know that they are a part of the game. And what we are interested in right now is what stance they will take towards it all. I am convinced that unfortunately they offer no solutions that we might be able to apply in real life. They are just playing another sort of game!” (transcribed from a secret recording of top representatives of a committee of the UN’s International Ministry for Saving the Planet ISOS , 2010, in the waters of the Adriatic Sea)

The above text forms the starting point and a kind of challenge for an exhibition in a building that has experienced many very different kinds of games. Even art, with its brief intervention into the building, is just a “sort of game”, one that clearly will not save the world. It can, however, affect us emotionally and stir up the routine of our thoughts. The works that have been selected for this exhibition always in some way reflect, directly or indirectly, the concept of games, and so we may briefly feel afflicted or have a chance to observe a “monstrous installation” at a local Kunsthalle on the kitchen counter.

Alain Rivière (France) / How I Made Certain of Exhibition
French artist born in Paris (1958). He makes paintings, drawings, photographs, installations, and videoart. Within the exhibition Woudl you like to play another game? he presents his video from 1998 titled How I Made Certain of Exhibition.
Lenght: 37´
http://www.documentsdartistes.org/artistes/riviere/page1.html

Florian Pugnaire a David Raffini (France) / Dark Energy
is a video installation presenting violently destroyed Volkswagen Transporter (crumpled, ripped, and burnt. The wreck looks like something from an unimaginable car crash during which the vehicle was not only smashed but also exploded. The atmosphere of the film running next to the van’s remains runs from road movie to cheap television series, sci-fi, and western. The film is presented as a story of the van’s transformation into a sculpture, showing the individual stages of this transformation.
Lenght: 15´ 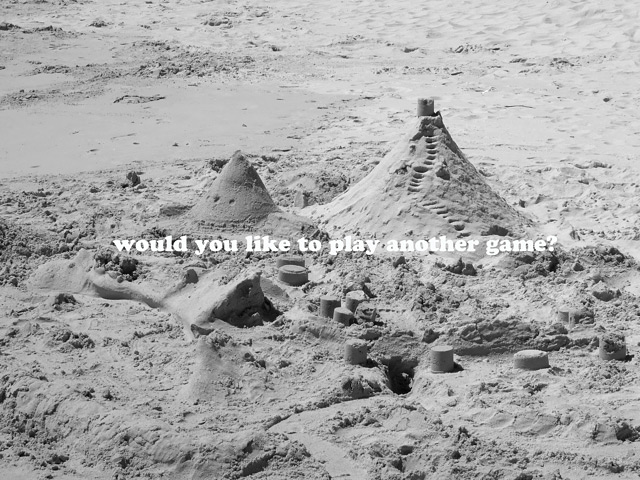