So can I start? For a while, the story being told by the film’s protagonist feels like a true story, something that only the author himself could have experienced, or that he heard from someone. This would correspond to Mančuška’s approach to several of his scripts, in which he collects ready-mades. The male protagonist returns home at night. He is in a building that is he is intimately familiar with. He climbs the stairs, puts the key into the door to his flat, and unlocks the door. Standing behind the door is a stranger whom he has never seen before. After a brief and absurd exchange of words, he throws him out. As if in a dream, the storyteller suddenly finds himself in a nearby city (Bratislava), where – as he eventually realizes – there exists an entirely identical neighborhood with an entirely identical building and with a flat opened by his key. This Kafkaesque storyline is staged as a parallel narration by a “real” actor and the storyteller, who speaks in voiceover – the story’s absurdity is thus loosely reflected in the dual functions of the medium of film – the “reality” of documentation finds itself juxtaposed with the scripted monolog.

The projects of the recently deceased artist Ján Mančuška (1972–2011) are like a contextual exploration of our immediate reality. Mančuška focused primarily on the processes involved in the perception and interpretation of objects and events and their social functions. He frequently worked with text, which takes on an independent role as object and symbol, and studied the various possibilities of non-linear reading. He also focused intensively on a reflection of the language of film and theater. At the 2009 Four Days festival, he created the performance “Invisible – Acting in Sequences,” which was adapted for the stairwell at the former Federal Assembly building. In 2010, Mančuška presented the Czech premiere of “The Backwards Play,” which was presented to great acclaim at Prague’s Archa Theatre and at the Hau2 Theater in Berlin.

Presented in cooperation with Vít Havránek, tranzitdisplay – a resource center for contemporary art. 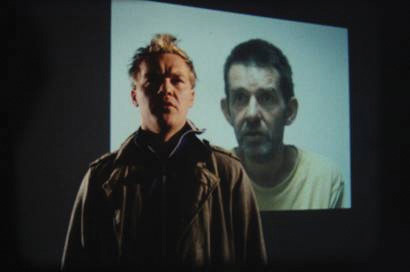