Silvia Calderoni is the central figure of this explosive and psychedelic one (wo)man show. This award-winning, eccentric Italian theatre and film actress uses her own body to present a tale of violence, pain, confusion, and (self-)acceptance. Setting out on a hallucinogenic road trip in search of freedom, she experiments with the DJ/VJ format within the context of the harrowing and decadent aesthetics of the 1970s and 1980s, which helps her to discover the space between sex and gender as well as between fiction and reality within the kaleidoscopic universe of Queer.

A very current study on overcoming oneself, it is filled with intense physical activity and focused self-exploration. This deeply personal ritual, subordinate to the powerful discipline of rhythm and gravity, raises questions about the state and situation of contemporary humankind. There is no narrative, nor any roles or motifs, just a solitary body immersed in a mixture of vertigo, torment, and arousal.

The Making of Justice is a movie about seven prisoners working on the scenario for a crime film together with Sarah Vanhee. Like the main character in the film, they are all guilty of murder. To shape the story, they draw on their own experiences, ideas and desires. We, the viewers, can only guess whether they are using fiction as a means of confirming, transcending or transforming their present situation.

This performative installation oscillates ironically between two far distant poles – art and war. In order to kill, seeing is key, just as it is for visitors to a gallery.

Over the course of history, the distance between the two sides involved in a battle has continuously increased: hand-to-hand combat has been replaced by the use of various devices – from knives to swords, lances, and longbows, followed by firearms, bombs, planes, and rockets, and ultimately ending with drones.

This solo performance will bring relief to all who need to stop, take a breath, and reclaim time – and together with it, their lives – from public control. In this compelling personal portrait, Claessens takes a wide detour away from required elements, such as notions about proper procedures, knowledge, fulfillment of expectations, maximum performance, structure, the purpose of things, and so on.

This visual concert by composer Ingvild Langgård and scenographer Signe Becker may be viewed as a music installation or as an artistic ceremony during which the past is transformed into the future. They find inspiration in mythological tales of rebirth, such as the one about a woman who collected old bones and brought them back to life with her singing.

The choreography of Syrian dancer and choreographer Mithkal Alzghair is set against a background of two conflicting emotions. On the one hand, the hope of salvation in the form of escape and, on the other, the depressing idea of the impossibility of return. This work, comprising two parts – Alzghair’s solo followed by the performance of three male dancers – grew out of an analysis of two dynamics, specifically forced movement and restricted movement.

What do you do when you see a man throwing stones at some target? And what do you do when you find out that the target is a duck sitting on her eggs? How do you react? The charismatic Australian performer Nicola Gunn has taken this real-life situation and transformed it into an action-filled visual contemplation. Using a diverse associative structure consisting of opinions, memories, quotes, and questions, the performer immerses herself into contemplating the boundaries between peace and conflict, moral relativism, the complexity of ethical intervention, and the true function of art.

A live documentary performance for film lovers and for anyone who has looked at pictures of their ancestors for too long.

On October 23, 1956, a peaceful student demonstration in Budapest grew into a spontaneous nationwide revolt against the Communist regime and the hegemony of the Soviet Union. During the clash with Soviet soldiers, tens of thousands of people lost their lives, and hundreds were tortured and executed. This was followed by one of the largest refugee crises of the twentieth century – as many as 300,000 people left Hungary, including the grandfather of this work’s author.

This suggestive living sculpture contains references to old memories and Moroccan choreographer Bouchra Ouizgen’s first mystical experiences. Long nights of Isawa and Hmadcha rituals were a regular occurrence in the Marrakech region, their monotonous repetition of rhythmic phrases to the sound of drums bringing the participants into a trance. 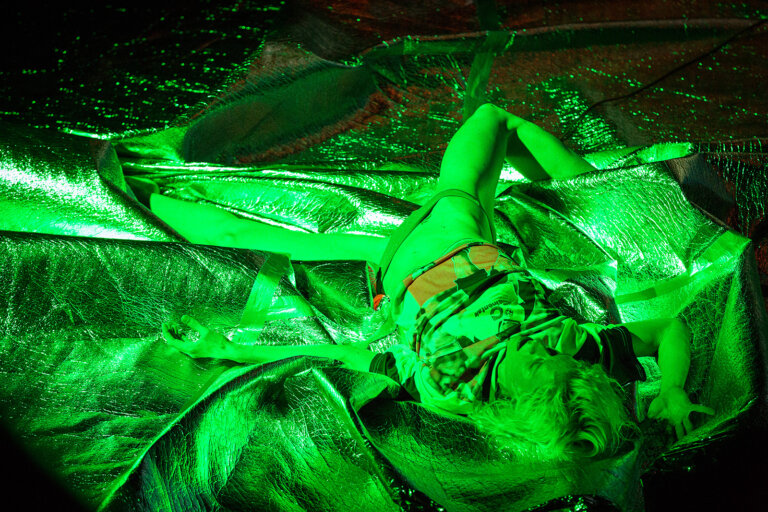